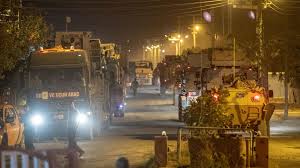 Acontingent of U.S. Extraordinary Forces was up to speed in Turkish shelling against U.S.- sponsored Kurdish situations in northern Syria, days after President Donald Trump told his Turkish partner he would pull back U.S. troops from specific situations in the zone. A senior Pentagon authority said shelling by the Turkish powers was substantial to such an extent that the U.S. work force considered terminating back in self-preservation.

Newsweek has learned through both an Iraqi Kurdish insight official and the senior Pentagon official that Special Forces working on Mashtenour slope in the dominant part Kurdish city of Kobani fell under big guns shoot from Turkish powers leading their purported “Activity Peace Spring” against Kurdish contenders supported by the U.S. in any case, considered psychological oppressor associations by Turkey. No wounds have been accounted for.

Rather than returning shoot, the Special Forces pulled back once the shelling had stopped. Newsweek recently detailed Wednesday that the present standards of commitment for U.S. powers keep on being based on self-protection and that no organization has been given by the Pentagon for a total withdrawal from Syria.

The Pentagon authority said that Turkish powers ought to know about U.S. positions “down to the matrix.” The authority couldn’t determine the accurate number of work force present, however showed they were “little numbers beneath organization level,” so somewhere close to 15 and 100 soldiers. Newsweek has connected with the Pentagon for input on the circumstance.

The Turkish Defense Ministry gave an announcement in light of Newsweek’s report, denying that its military had focused on U.S. powers. The service attested that “Turkish fringe stations south of Suruc went under Dochka and mortar fire from the slopes found around 1,000 meters southwest of a U.S. perception post.”

“In self-defense, reciprocal fire was opened on the terrorist positions of the attack. Turkey did not open fire at the U.S. observation post in any way,” the statement added. “All precautions were taken prior to opening fire in order to prevent any harm to the U.S. base. As a precaution, we ceased fire upon receiving information from the U.S. We firmly reject the claim that U.S. or Coalition forces were fired upon.”

“The explosion occurred within a few hundred meters of a location outside the Security Mechanism zone and in an area known by the Turks to have U.S. forces present,” the announcement included, taking note of that there were no U.S. wounds nor have U.S. staff pulled back from Kobani—with Newsweek’s source ready to affirm the U.S. had different situations in the city.

“United States remains opposed to the Turkish military move into Syria and especially objects to Turkish operations outside the Security Mechanism zone and in areas where the Turks know U.S. forces are present,” the statement concluded. “The U.S. demands that Turkey avoid actions that could result in immediate defensive action.”

Turkish President Recep Tayyip Erdogan had since quite a while ago cautioned he would storm the outskirt to build up a purported “safe zone” and, after the White House reported Sunday that U.S. troops would stand aside, he propelled the activity recently.

In its Sunday explanation, the White House had said that U.S. troops “will never again be in the quick zone” as Turkey and associated Syrian radicals initiated their ambush. During Friday’s public interview, Joint Chiefs of Staff Chairman Army General Mark Milley said that U.S. staff were “still co-found” put something aside for “two little stations” close to the outskirt with Turkey. Barrier Secretary Mark Esper said 50 Special Forces staff had been repositioned in front of the Turkish and unified Syrian radical attack.

The U.S. first joined forces with the to a great extent Kurdish Syrian Democratic Forces in 2015 to fight the Islamic State activist gathering (ISIS) as the nation moved its help away from an inexorably Islamist restriction looking for the oust of Syrian President Bashar al-Assad. The gathering demonstrated powerful in beating back the jihadis, yet the U.S.’ choice was contradicted by Turkey, a NATO part that has gone head to head with a decades-in length revolt by Kurdish separatists.

Turkey remains the last significant patron of the Syrian resistance, made up to a great extent of individuals from the nation’s Syrian Arab larger part, and has assembled up to a thousand warriors from these powers, alongside several its very own soldiers, so as to hold onto region at present regulated by a dominant part Kurdish self-sufficient organization that traverses the nation’s north and east. This self-administering element has not been perceived by Ankara nor the focal government in Damascus, which has verified a great part of the remainder of the nation’s region with the assistance of Russia, Iran and unified civilian armies.

The Pentagon has more than once asked Turkey to end its activities and, however he at first flagged help for Erdogan’s arrangements following their telephone call Sunday, Trump has since taken steps to endorse the Turkish economy if the nation’s military activity did anything “forbidden.” While the president has over and again required a conclusion to the expensive, “unlimited wars” propelled by his antecedents in the Middle East and past, he likewise cautioned he may send more troops to Syria if the circumstance was not settled.

On Thursday, Trump tweeted that he had “one of three choices: Send in thousands of troops and win Militarily, hit Turkey very hard Financially and with Sanctions, or mediate a deal between Turkey and the Kurds!”